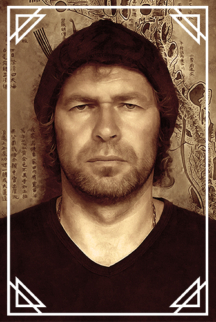 Oleg Cherne has experience of more than forty years studying Taoist tradition. This path covered various aspects of apprenticeship, from total service and being a hermit to teaching people around the world. Oleg went through an intense personal transformation, which resulted in becoming initiated into Taoist alchemy under the name Jie Kong.

However, we should not look at this level of achievement from the perspective of «what happened yesterday.» Since real alchemy is not a way forward or backward, it is a path into the depths. Alchemist focuses on the process. The process is the path.

For Jie Kong, the alchemical path and knowledge became a reality when he understood that the most important is to increase the level of concentration. There are many wise words and new practices out there, but without personal effort, it won’t become your inner truth.

«Any brainless activity develops even more ignorance and sometimes even laziness. The presence of great teachers and masters does not make you better. I can list everyone I studied with, but this is not an indicator of the level. Now I can say that the most important is no big name of your teacher but whether he taught you about  HOW to learn.

The art of learning starts with understanding the code or the language of practice. Only then we can grasp the essence of what we are doing and apply it in our life.

At the beginning of the path, the cultivation of inner balance and harmony is essential.  For the alchemist, there are no victories and defeats; the process is imperative. And the result —  the depth of concentration.

Before real practice begins, it is necessary to change many things: to get rid of internal destructive patterns, and more importantly, to get away from protecting them. At the same time, to accept that this cannot be done overnight, in a hurry, wanting to get the result as fast as possible. We need to be prepared to travel a long way to transform ourselves,» says Jie Kong.

However, the power of awakening and special abilities were obtained through practicing Taoist alchemy — a tradition in which he received his Taoist name Jie Kong.

Moreover, this name is also associated with the period of the hermitage, which lasted almost ten years. Till now, the journey of obtaining and transmitting knowledge is the central theme of his life and personal intention.

The time that precedes the formation of  Jie Kong started somewhere from the age of 16 when he studied karate in the Soviet way. This period is described in great detail in his three books: «Immortality and Sexual Syndrome», «Hey, You!» And «The Hermit». In these books, Oleg represents the search for his identification. He often repeats that if there is no personal identification, what kind of biography a person might have?

One needs to develop personal power to be able to shape his life philosophy and life values. For Oleg, such philosophy is the path to inner freedom, which was reduced first to the idea of ​​fighting with oneself and only then lead him to real practice.

At first, he believed for a long time that he practiced and did something, but only after 15 years, he received evident results.  Perhaps, this was the most awaking inquiry when, in one day, you realize that you were only hiding behind names and exercises, but in reality, nothing has changed.

Oleg’s philosophy, discipline, and specifically, personal struggle with death, helped him to wake up and to start everything again. With the initiation with the name Jie Kong, life became meaningful. Although he has studied Taoist tradition for a long time, he received his name only after 15 years of practice. Oleg Cherne considers this period to be the most important since he managed not only to get some information but to gain real knowledge.

The path led him to secret places in the sacred mountains. For example, he studied symbols and talismans in the Maoshan mountains. In Laoshan, Oleg learned alchemy; in Laofushan, he encountered the tradition of forming Nivan Gong; and finally, in Weibaoshan and Taishan, he met the immortals.  Oleg considers exceptional moments having sessions with the famous masters in Hong Kong, Taiwan, Singapore, etc.

His path took him to study with different Daoist families like Chen, Lien, Bay, etc. However, he dug deeper, comparing and trying to get a bigger picture until he’d not meet with real teachers of the internal art of alchemy. His quest as Jie Kong would have ended if it had not been landed in Hong Kong, where the monks of Maoshan sent him.

Everything that started after Hong Kong that influenced his future. When Oleg arrived in Hong Kong, he met with Master Yu, a monk of the Heavenly Mentors School. This meeting changed the direction of Jie Kong’s life.

Three years of learning with Master Yu helped him to achieve a greater understanding of Taoist alchemy. It is Master Yu who gave Oleg name Jie Kong, which means Disciplined and Mysterious. After he referred Oleg to another teacher, Master U. Master U is a hermit and immortal and represents several Taoist schools at once. Oleg regularly studies with him till now.